I’m no stranger when it comes to this situation, I had to repair one recently. This is after getting a couple quotes from local plumbers who were ready to charge up to $400 to remove a busted pipe  and install a new one.

We have the PEX plumbing system and our setup with a mix of copper pipe and PEX pipes. For some homes, it may just be all copper. Either way, the concept of repair is similar.

Now what’s ironic is that we have a freeze-less inlet wall faucet  which is designed to prevent the pipes from rupturing during freezing temperatures. This protects up to 125 psi of back pressure, but ONLY effective if the valve is shut off and the hose is removed.  That was the mistake we made.  Below was the one we installed at our home, but there are many different versions and sizes available.

One thing to keep in mind is the PEX connector is made of plastic and can break if tightening too much. I would recommend tightening with your hand and if needed, maybe one or two turns with a wrench.

After we were able to remove the pipe, we rushed to Lowes and picked up the same exact wall faucet for about $35. I also grabbed some Teflon tape and outdoor stainless screws. The Teflon tape was to prevent any leaking on both pipe and facet. You can simply wrap a thin piece once or twice around the threading.

The wall faucet, you can find them at any hardware shop and is easy to install. We did NOT have the hassle of cutting and soldering the copper pipes which saves a lot of time. That alone makes it worth the money. Not to mention how much the plumbers would have charged.

The installation took about 15 to 20 minutes. This includes ensuring the water outside was running and nothing was leaking inside the home.

One thing to note is that when we reconnected the pipes, there was water leaking since the rubber ring washer was not installed. So before you panic, make sure this is not missing between the connectors. 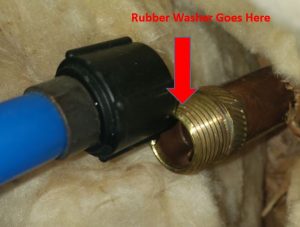 There are several ways to protect your pipes from freezing:

In this situation, it was very simple to fix and that is because I’m comfortable with these type of projects. For some folks who are not, seeking a professional is not a bad idea. Either way, hopefully, you will benefit from preventing this from happening again or ever happening.