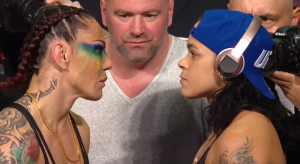 This has to be one of the most highly anticipated fight in UFC, coined as the Women’s first “Superfight”. When it was first announced earlier in the year, there were doubts regarding if Amanda would show up to this fight since she postponed it earlier in the year. To that point, I think it allowed her to better prepare for the fight as she added a few more pounds to match up with Cyborg. I personally thought Cyborg would walk through Amanda and taking her out by the third round due to the pressure and power. There was a lot of buildup for this fight and was very entertaining to see them exchange verbal jabs leading up to the fight. I was rooting for Cyborg and I’ll be interested to see if a rematch happens. 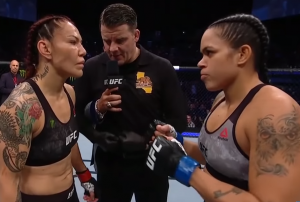 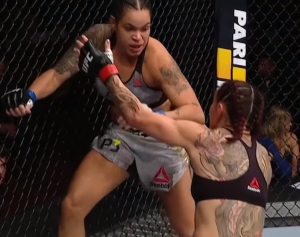 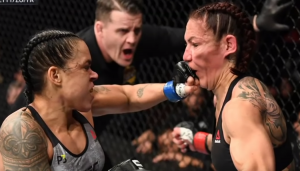 The fight started very fast and aggressive. First thing I’ve noticed was the amount of weight Amanda gained compared to her previous fight and looked a bit bulkier than Cyborg.  Once the fight started, Cyborg began backing up Nunes immediately and paid for it. Once Amanda tasted Cyborg’s power, she knew she was capable of withstanding and exchanging with her. I think things went really wrong for Cyborg when she started to eat the punches the way she did. She did not backup to try to recuperate and tried to exchange without keeping her guard up. The fight ended in 51 seconds with Amanda KO’ing Cyborg face down.

If the rematch does happen, I think Cyborg would do much better and win. Cyborg would have to go into this fight taking caution and not try to walk through punches like she did the first time. Secondly, she would need to put her hands up and since she won’t underestimate Amanda this time, she would be much better prepared. Even though she stated that she did everything right in her training camp, I wouldn’t be surprised that she might have underestimated Amanda based on the fact she tried to walk through her punches the way she did.

UFC 232: Why Amanda Nunes and Cris Cyborg should have an immediate rematch 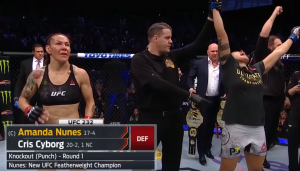 Amanda definitely shocked the world and she rightfully earned the respect and moment. There’s no doubt that she proved a lot of us wrong that night and if there was a rematch, I think it’s best for Cyborg to have a couple more wins before going after Amanda since she was beaten in such a convincing factor. There are a few things that could prevent this fight from happening:

Cyborg was a true champion by getting backup and respectfully giving credit to Amanda for her win. One note – Cyborg was disappointed that she was not able to address her fan after the loss, stating she noticed her fans were crying and was immediately escorted out of the octagon. Just for those who don’t know, UFC only gives the mic to the winner of a bout and I think it would be a nice change if they find a middle ground in which for championship bouts both fighters can address their fans.

As for Amanda, she’s definitely special and improving as the fights go on. I would expect her to continue to work hard and she’s going to be at the top of the game for a very long time. She’s the first ever woman to hold two-titles in UFC and beating the best in the game to do so. Even with 4 losses, she’s come a long way and since she’s taken out some of the best fighters (Rousey, Cyborg, Tate, Shevchenko, and Pennington), there’s no doubt she’s the best women champion right now.

Congrats to Amanda for her success and Cyborg displayed great sportsmanship.

What does Cycling your Aquarium mean?