Hollywood Movie Director David Leitch, who directed movies such as “DeadPool” & “Fast and the Furious” has considered remaking “Enter the Dragon” which starred Bruce Lee. The last we’ve heard about this was back in July 2018, so there has not been any news recently.

I have been a Bruce Lee fan since I was a kid and like most folks, he has inspired many especially when it comes to martial arts. So any Bruce Lee news always brings attention.  I think the remake can be a mistake if it’s not executed properly. If we look at past attempts of actors trying to be Bruce Lee, many have failed miserably.

Enter The Dragon Remake in the Works!

There was “Dragon: The Bruce Lee Story” played by Jason Scott Lee and he was moderately decent, and his impression of Bruce was an acquired taste. Bruce Lee’s movies were great because of Bruce Lee himself. Between the two modern imitation of Bruce Lee movies (Birth of the Dragon in 2016 and Dragon the Bruce Lee Story in 1993) – I think while they both did a good job playing the role, but they hardly resemble the master himself.

A remake would at worst be almost like those old Kung Fu flicks that tries to mimic Bruce Lee (Bruce Le, Bruce Li etc.,) after his death.  It can be a disaster if they cannot find someone who can play the role of Bruce Lee which is the biggest challenge.

There has already been some noise created from the Asian Hollywood community.  See the Twitter responses from Daniel Dae Kim, who has starred in Lost, Hellboy, and Hawaii Five-0 and Into the Badland star Daniel Wu and other Asian actors/actresses: 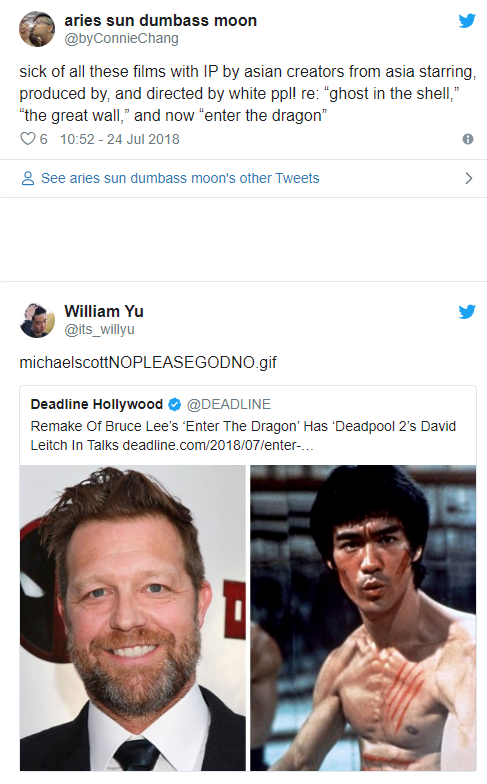 Remake for Bruce Lee’s Enter the Dragon in controversy

There’s no denying Bruce’s charismatic personality shines through the screens and his on screen mastery fighting skills is incomparable even til this day. While I do enjoy watching the likes of Jackie Chan, Jet Li, Tony Jaa and other martial art Hollywood stars, there was something special about Bruce.

For all of you Bruce Lee Fanatics, here are some pics from the “Enter the Dragon” movie:

At the end, I think as a Bruce Lee fan, I will watch the movie if it does get made. While there’s no one who can replace the great Bruce Lee, it’s always nice to have something that allow us to relive the memory. Then again, it’ll be a risk as Bruce’s legacy was built on this film and was the film that gained him international fame. The expectations will be high, especially when you are riding off the name of one of movies.

What do you all think?

Freshwater Fishing and Reading the Waters

© Copyright 2018-2023 THATGUYREVIEWS.COM
Reach Out to That Guy! Opens in a new tab
Not a member?
Sign up
Already a member?
Sign in
Back to
Login
×
Close Panel