This is a very interesting fight that should have happened a long time ago. Broner makes it very entertaining with his ability to sell the fight; while he plays the role of a bad guy well, in some ways you want to root for him based on his entertainment. In more recent interviews including the interviews and social media where Pacquiao is starting to engage in throwing verbal jabs at his opponent, and that’s probably because he finally realizes that he needs to do more to attract more viewers.

As far as the fight, Pacman has the edge due to his speed, power and training ethics. While Broner tends to run into his share of “problems” outside of the ring. In most recent news, Broner was arrested in Florida right before Christmas just three weeks before the fight. He was arrested for failure to appear in court earlier in the month.  Based on recent YouTube clips, Broner definitely cranking it up during his training camp as he has been seen to have lost a nice amount of weight in such a short amount of time. However, news like this can’t help his cause, especially if he is behind bars.  Luckily for the fans, he was able to post bail and we’re all keeping our fingers crossed that he can stay out of trouble until then.

In the News: Adrien Broner Arrested Just Before Christmas in Florida

On the flip side, Pacquiao has released just as much clips of him training and has even stated that he’s looking for the knockout this time. It will be exciting to see if his momentum from the Lucas Matthysse fight will carry over. If he does knock Broner out, he will be the first to do so.

My Analysis Based On Recent Performance

I was not too impressed with Broner’s performance against his last opponent Jessie Vargas. I personally like Jessie as a person, he seems like a nice guy with a good head on his shoulder. However, I can’t speak the same for his boxing skills. I would rate him as a B level fighter and Broner struggled early with him. Broner could not let go of his punches and let the fight get away. If he does the same with Pacquiao, I can say that Broner will be in trouble since Pacquiao is a volume puncher. One additional motivation for Broner is that if he beats Pacquiao, he knows, as he would say, “become a legend over night” and also likely to have a shot against Floyd Mayweather. Broner knows that this is probably his last opportunity to make good in which he’s failed to do so in the past with other championship opportunities.

Only Adrien Broner stands in the way of a possible Manny Pacquiao vs. Floyd Mayweather rematch 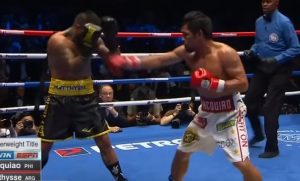 Pacquiao on the other hand took on a very strong opponent Lucas Matthysse. While some may say he’s washed up, I would say that if Lucas had put up a much better fight than he did, the argument would have been different. Pacquiao looked pretty muscular and fast in that fight. Pacquiao is all business, and while he’s facing Broner, fighting Floyd Mayweather appears to be his main objective for coming over to PBC and continuing to fight. He knows that in order for him to have that opportunity, he must get through Adrien Broner first. With that additional motivation, I think Pacquiao might even knock Broner out.

Pacquiao: I Forgot How Fun Knockouts Are; I Want To KO Broner

The bet lines currently have Pacquiao as a favorite and I agree.

Manny Pacquiao, TKO by the 8th Round 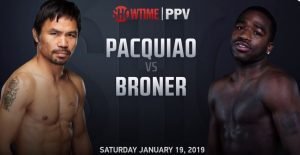 Want a Fish pet? Here’s How…