If you are looking for a small compact commercial version of a claw machine, look no more! In this article, we’ll take a closer look at the Rhino Mini-claw machine and one of the top distributors for this mini-claw machine is Candy Machines!

Information from the Distributor: The Mini Crane Vending Machine is a compact version of our full-size claw machines. This machine features the blue graphic set with cute little monsters and characters that kids will love.   Set it has win every time and have it function as an interactive electronic vending machine or set the win ratio to skill play. With a super small footprint, the Mini Crane Vending Machine will work with just about any location. Go CASHLESS by adding a Nayax credit card reader!  This machine does well in any family friendly environment such as restaurants and movie theaters.

The order took roughly six weeks from the time of placing the order to the time it arrived at our door. Though this was situational as it was explained that the previous batch shipment was damaged during transit so normally the order would have arrived much sooner. But kudos to CandyMachines for including a courtesy free fill of 200 ducks!

Different Versions to Choose From

There is a newer version of the claw machine that was released recently, which looks a bit different than what I received. One of the noticeable differences is the improved topper which is like a locker. You can find the different variations on CandyMachines.com. 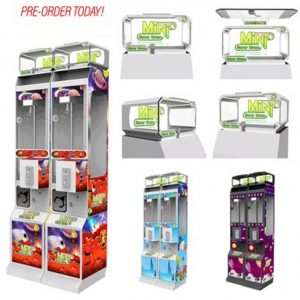 The order took roughly six weeks from the time of placing the order to the time it arrived at our door. Though this was situational as it was explained that the previous batch shipment was damaged during transit so normally the order would have arrived much sooner. The price point was approximately $1,139 including a $249 freight shipping charge.

The machine arrived in great condition, which Fed-Ex did a good job handling the machine. You will have to setup an appointment for delivery once the claw machine arrives at your local delivery point. All-in-all, it took about a week from the time it’s shipped from their Chicago distribution center.

I personally did not like the fact that I had to pay so much for shipping, however, once it arrived, it was certainly worth it! The claw machine was tied down securely, and the delivery was smooth as can be.

Check out these other miniature claw machines! Here are some of the more popular mini-claw machines which is affordable for home-use. These are great gift ideas and in home play action!

The machine was packaged very carefully. There was plenty of bubble wrap and tape to endure the trip. The machine was approximately 100 lbs, so if you are able to have an extra hand, that would be very much recommended. Though if you are pretty healthy and strong, it shouldn’t be a problem moving it around since it’s a compact slim version compared to the normal size.

Check out the video above for the unboxing and more!

The mini crane claw machine was very nicely built. It comes with a back stand which keeps the machine balanced, especially against any shaking. The machine has lots of lights which can draw the attention of anyone walking by. And the standard claw can grab prize in sizes of 2 to 3 inches and has deep compartments allowing for storing many prizes.

There’s plenty of options that you can adjust. From the win ratio, air-grab feature to the brightness of the led screen and how many coins per play. There are many add-ons that can be purchased with the machine including dollar bill readers etc.,

The game play is very smooth and reliable. We have played over 3,000 games thus far and not one glitch. The only downside to such a small machine is the claw itself does not reach all the prizes resting against the glass. In addition, the back piece is a mirror which gives the illusion that there’s more play space, but it’s a nice aesthetic feature.

This is a great purchase for anyone looking to venture into the claw machine business or just for your home arcade room. I personally have enjoyed the experience of owning a claw machine and can play at my leisure. It’s definitely a great attraction for guests at the home.

In addition, the distributor Candy Machines is a reliable and trustworthy vendor. They are very upfront with the status of shipment and even dealing with any issues. I would recommend Candy Machines for any of your claw machine needs!

© Copyright 2018-2023 THATGUYREVIEWS.COM
Reach Out to That Guy! Opens in a new tab
Not a member?
Sign up
Already a member?
Sign in
Back to
Login
×
Close Panel