Shawn Porter vs Yordenis Ugas is a very exciting fight this weekend. I am a fan of Shawn Porter, and I believe that he’s one of the more classier fighters out there. He’s very well spoken, charismatic and seemingly a polished individual. His relationship with his father Kenny Porter is very admirable, a bond which most people wish they have with their own father. As any fighter would, Shawn tends to to drum up drama to get the attention needed for fights he wants like the time he confronted Danny Garcia in the ring. Either way, I am a fan of Shawn and was rooting for him to win this weekend.

To be honest, I did not think this fight received enough attention as it should. I did not know who was Yordenis Ugas until this fight was announced. We knew that Spence called Porter out and thought that was the next fight in line, but settled for this fight with Ugas. There was some press around Porter and Ugas’s past history in which they  had sparred before, and it was clear that someone had the better of the two. Porter tends to suggest that Ugas is not on his level and this is possibly one of the reasons why.

I thought Ugas looked much bigger and towers over Porter which I thought was going to be a factor especially since this is Ugas’s first opportunity at winning a professional championship in NINE years.  Watching all the interviews and pre-fight hype events, I can tell Ugas was going to come with everything he’s got.  Ugas’s only loss dates to his back-to-back fights with Emanuel Robles and Amir Imam as a junior welterweight in 2014, then moved up to welterweight and was riding an eight fight winning streak. Porter obviously looked pretty confident himself, but had mentioned that he was not overlooking Ugas and knew Ugas could present some challenges for him.

The weigh-in, Porter was slightly over the weight limit and was a shocked since he was always prepared. Porter had to cut a bit of his hair to be able to make weight. Porter had stated that the hair was wet which which had some weight to it. This could have been an indication that Porter was either underestimating Ugas,  or overworked from training and he will probably have an off night. When fighters have to drain themselves to make weight the prior night, it will have an impact on the fighter.

Shawn Porter misses weight, gets a haircut to make limit 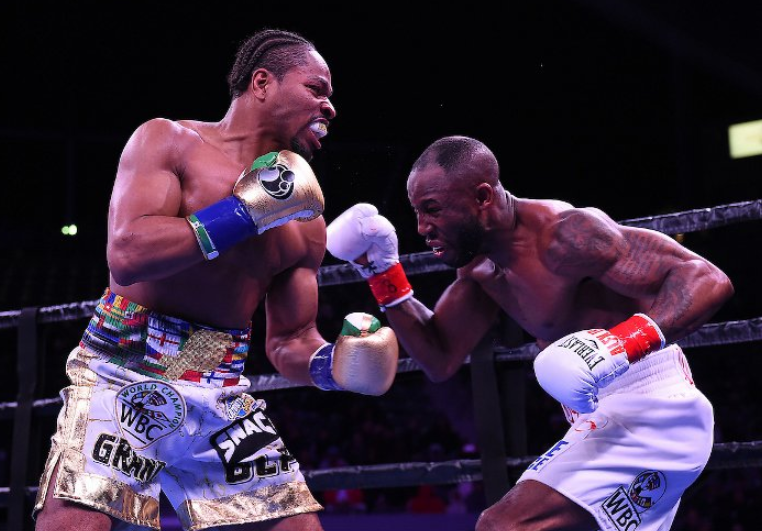 Throughout the fight, Porter used his footwork and tried to attack on the outside. Ugas however, stayed in the pocket and made Porter work. My initial thought was Porter was throwing a lot of punches, but he was also missing a lot. Porter did not seem to be effective when his punches land since he was doing a lot by moving around. Ugas forced Porter to fight his fight and often challenged Porter to come forward, which fans are not accustomed for Porter to do. Porter is known as a pressured, high volume fighter. Kenny Porter did say during his interview between rounds that he thinks Shawn could outbox Ugas and that was the plan.

Ugas did trip Portal which appeared as an attempt to bully the champ using his size. Surprisingly, Porter did not tried to fight on the inside more since Ugas had the reach advantage. Throughout the fight, Ugas would often try to intimidate or get into Porter’s head by staring him down or having a word or two as Porter goes to his corner. This might be an indication that Ugas was a bit agitated that Porter suggested that he was not on the same level indication that he thinks that the round is going his way.

Mid-way through the Fight

There were some critical moments including at the end of the 11th round which Porter landed a hard left shot that wobbled Ugas and even so, he kept coming forward. Porter around that time looked like he was running away from Ugas to offset some of the pressure. This was rather unusual for Porter, I don’t think I can remember the last time Porter was fighting on the back foot so much in the final rounds. This could have been his strategy, but to me, it looked like Porter was trying to avoid getting hurt.

Then late in the 12th round Ugas landed a punch and the referee ruled it as a slip. Shawn immediately got up and jumped up and down to indicate in attempt to erase any doubt that it was a slip and not a knockdown. My immediate reaction was that it was a flash knockdown. When I reviewed the highlights again, I think it was indeed a knock down.

At this point, it was going to the scorecards, and I was saying to myself “there’s going to be a new champion and if they give it to Porter, it’s a robbery.”

When the scores were announced, I thought it was a draw or Ugas was going to be the new champion.  While I don’t think this was corruption, I think the judges were torn with Porter being the champion. Porter was busier and may appear more favorable sitting ring side. I think Ugas was too stationary for the judges, and tried to force Porter to fight to him. Ugas did landed more effective body punches.

Throughout the night, Ugas provided theatrics through his gestures of urging Porter to the middle of the ring and getting in Porter’s face while the bell rings at the end of each round. Obviously Ugas was upset and left the ring with smiles but did not stick around for the in-ring interview.

More about the scores

Porter landed 144 of 515 shots, and Ugas connected on 128 of 449. Therefore, Judges tend to award the busier fighter, but if it’s that close, the effective punches tend to be more favorable.

Either way, the judges were probably looking for the challenger to defeat the champion in a more convincing fashion. If they ruled the “slip” a knockdown in the 11th, Ugas could have gotten the decision. I personally thought Ugas won 8 rounds of the 12 rounds.

Porter’s disappointing performance was a shocker. If Porter wants to be seen as the better opposition in the class of the elite Welterweight fighters (Thurman, Spence, Garcia, etc.,), he has to be more effective in his fights. The last three has all gone to decision. In addition, Shawn must know this and will be chasing the Thurman, Spence or Pacquiao fight after this. He can only win if he can improve including correcting the mistakes he made in this fight.

Ugas has proven that he belongs at this level and deserves a rematch and more credit moving forward. Hopefully he’ll have another opportunity at another championship fight. Based on his performance here, I would not doubt that he could be a good fight for any one of the Welterweight champions today.

Your thoughts on Shawn Porter vs Yordenis Ugas